Out of the Blue, A Calligraphic Journey through Alcantara is an exhibition promoted and produced by the Municipality of Milan – Culture Department, by the Royal Palace of Milan and by Alcantara S.p.A., devised especially for the Apartment of the Princes.

The exhibition, curated by Dagmar Carnevale Lavezzoli and Katie Hill, is featured in the programme of the Milan Art Week 2020 (7-13 september 2020) and confirms Alcantara’s ongoing interest in the most advanced forms of contemporary creativity: Out of the Blue in fact marks a new stage in a cycle of works that since 2015 has explored the qualities of Alcantara® as a material for art and design, transforming various spaces of the Palazzo Reale in Milan into gateways to exhibition proposals of the most unusual kind, both in terms of contents and means of fruition. With this project, the company that produces and markets Alcantara® worldwide continues this original form of research and development, once again opening up to both established and emerging creatives and collaborating with them on the creation of original works. In Out of the Blue, six established Chinese artists – Qin Feng,

Qu Lei Lei, Sun Xun, Mao Lizi, Zhang Chun Hong, Wang Huangsheng – combining the millenary tradition of their past with the latest technologies, let themselves be inspired by the specificity of a single medium and explore Alcantara® in all its declinations and potential through works that offer transversal readings, ranging from the classical to the contemporary. Using Alcantara® as a common denominator, the artists explore the versatility of this avant-garde medium to create works imbued with personal and collective memories. By integrating ancient practices with a futuristic material, China’s millennial cultural heritage acquires new expressive potential.

Calligraphy is one of the highest artistic forms in Chinese culture. After the age of technical reproducibility and the advent of the digital era, this ancient discipline still represents a vehicle of knowledge, a voice addressing topical issues, and a medium that connects an ancient past to contemporary philosophical research. Recognised by UNESCO as an element of world heritage, more than any other type of writing or ‘alphabet’, Chinese calligraphy has always been appreciated for its aesthetic and artistic value: every stroke appears to have been dictated by a soft and gentle flight, endowed with the flow of life conferred by the very instinctiveness of the gesture and its pictographic nature, for each character is a direct representation of something and its meaning. The great ‘non-action’ of Wu Wei spirituality – the practice of acting without acting, without forcing things but allowing a natural and spontaneous course to flow, to become – joins the aesthetic sphere. Hence the connection to the Tao, or rather the Dao, ‘the way’, the unfaltering principle that gives rise to the cosmos.

The Apartment of the Princes at the Royal Palace is transformed into intriguing experiences where site-specific installations respond to the aesthetics of the rooms through both affinities and visual contrasts. Ranging from digital projections to ink forests on rolls, the artists are inspired by calligraphic practice to question the nature of the relationship between man and the world around him through Taoist notions of temporality, life force and participation. 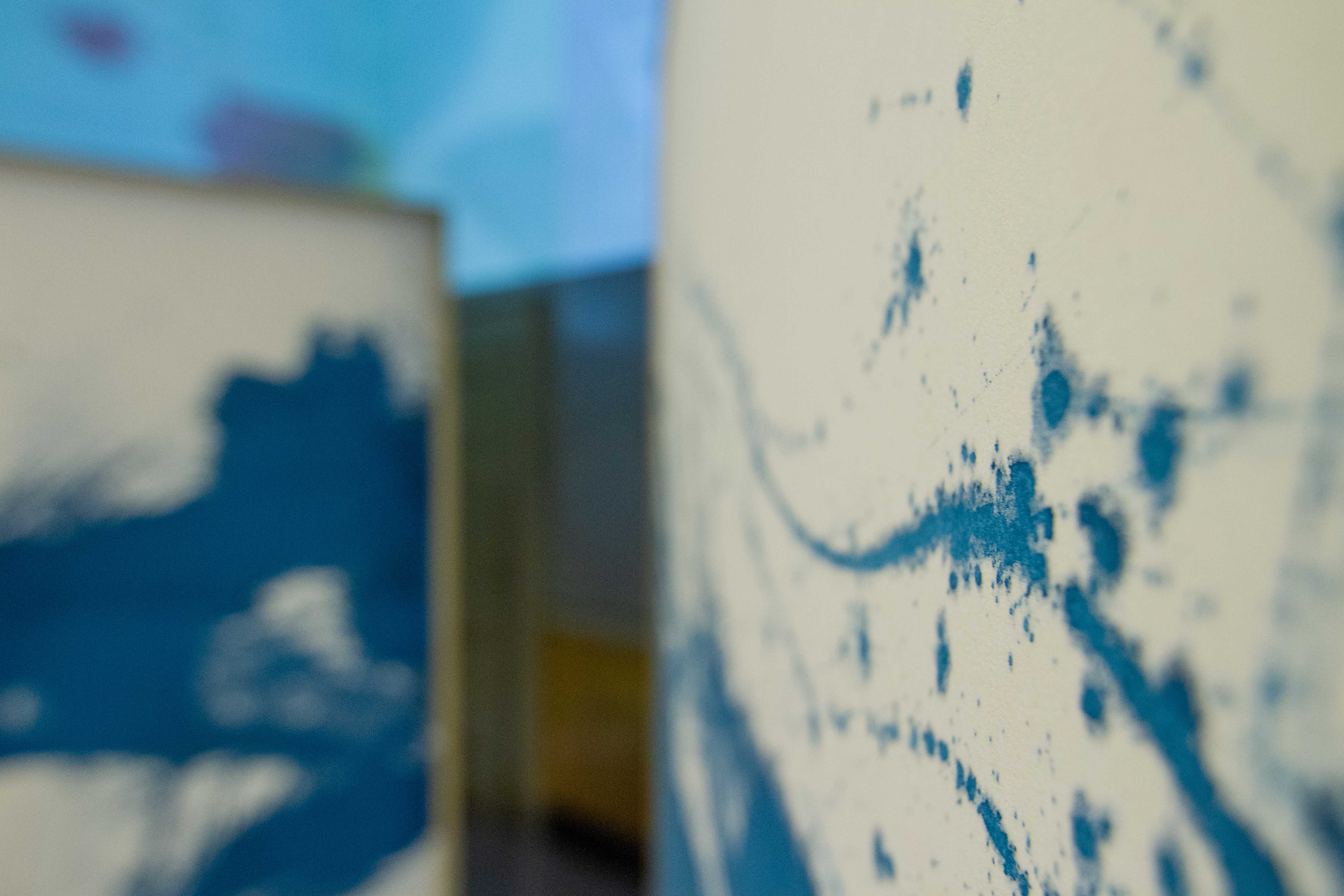 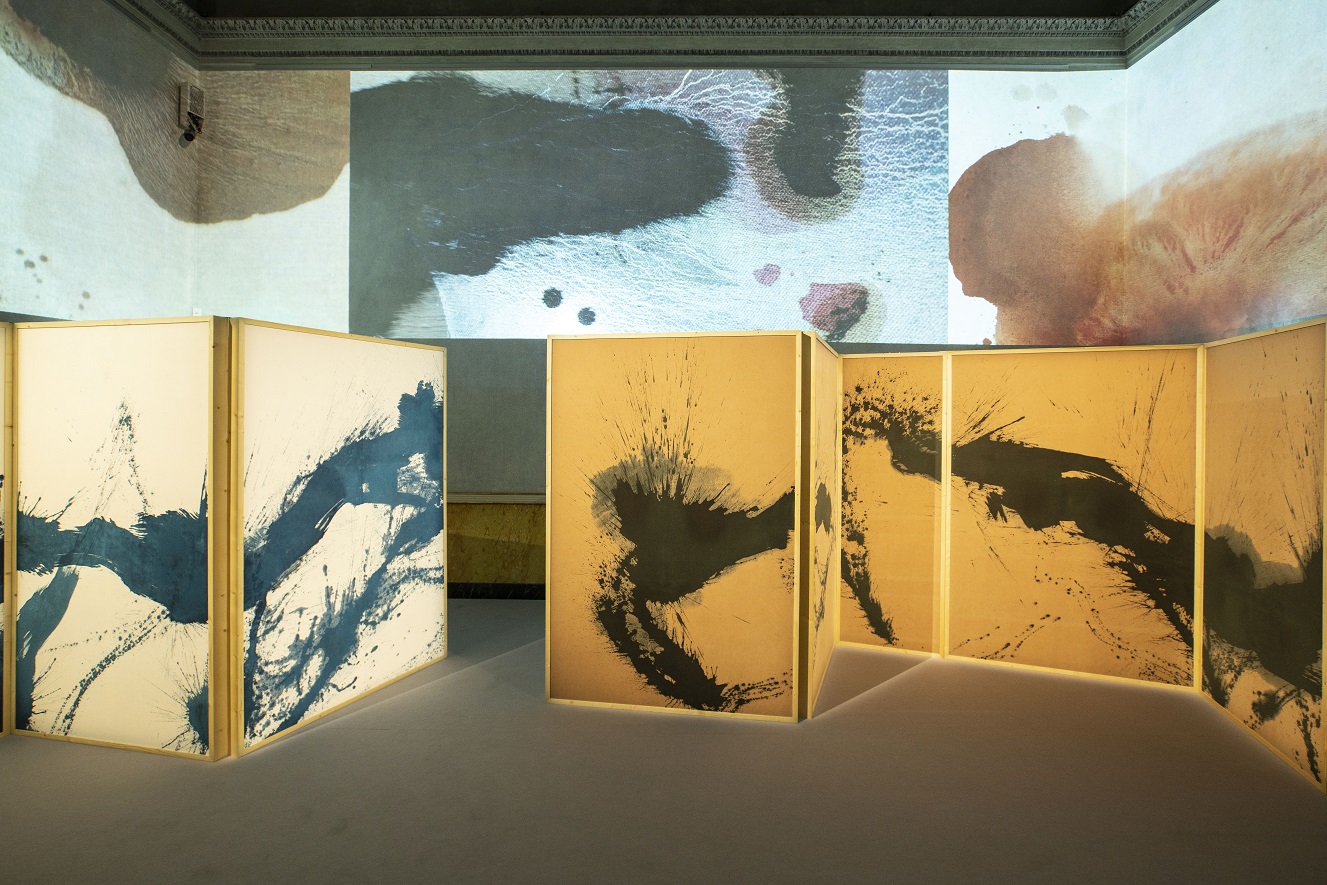 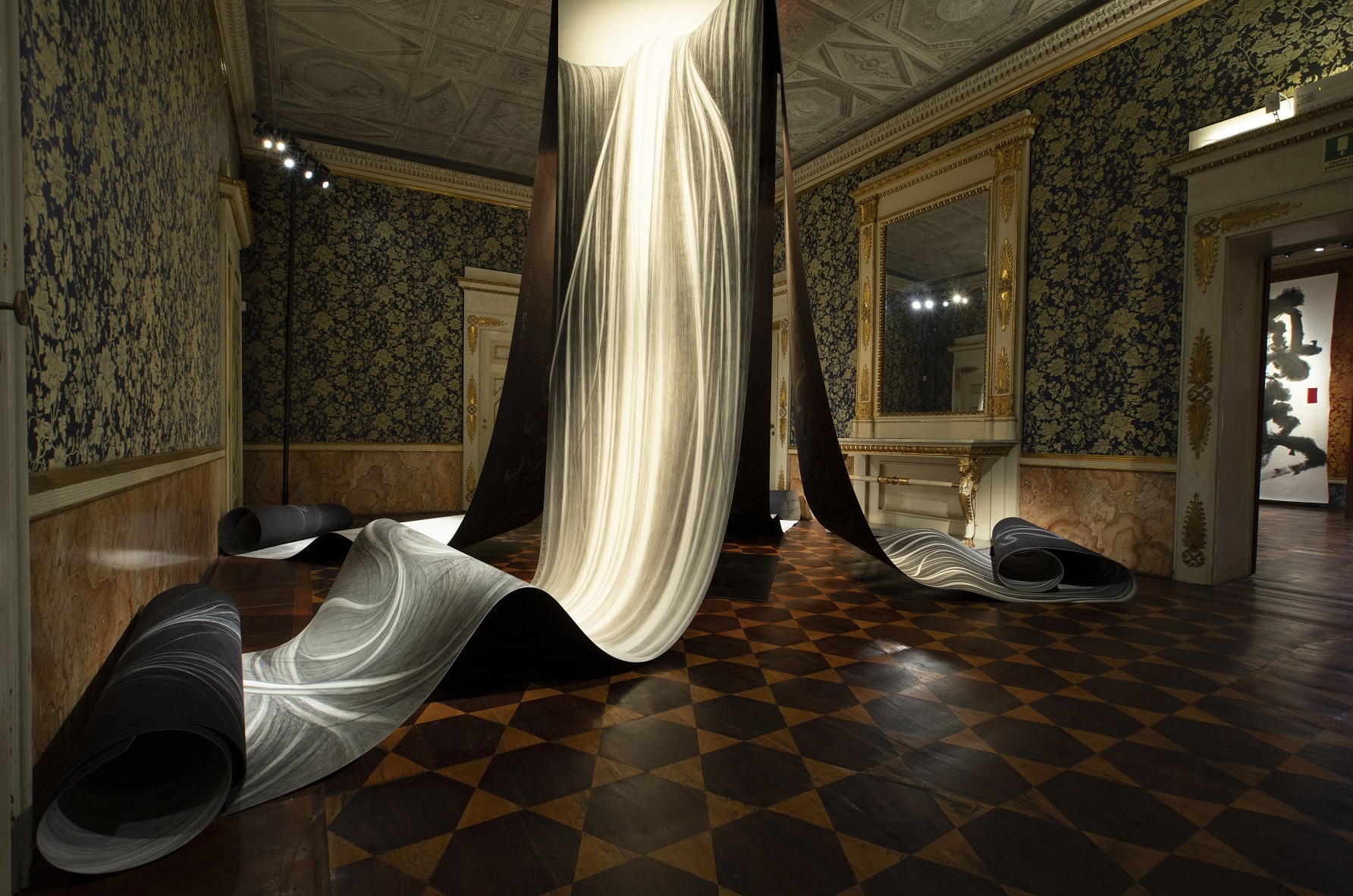 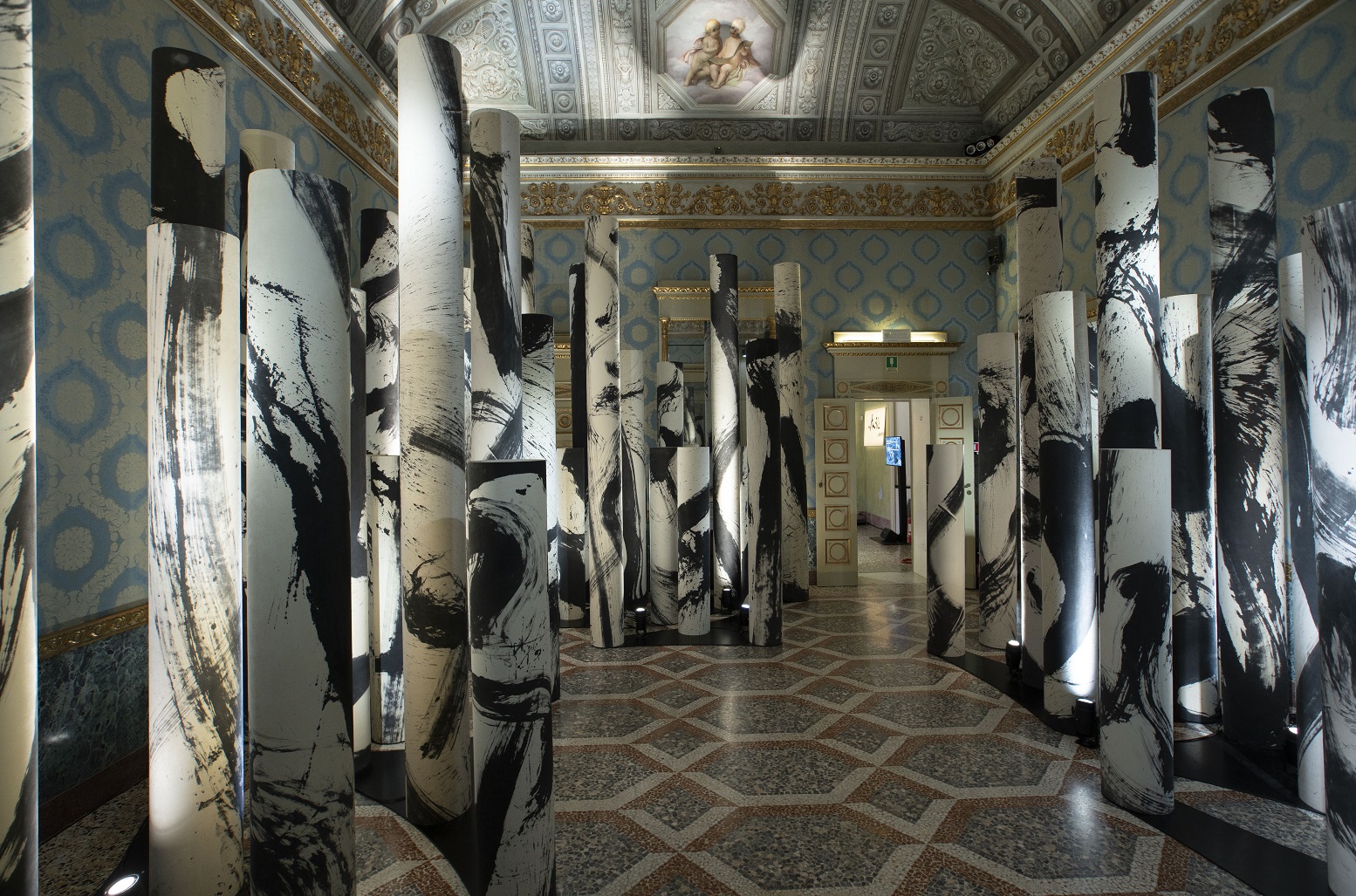 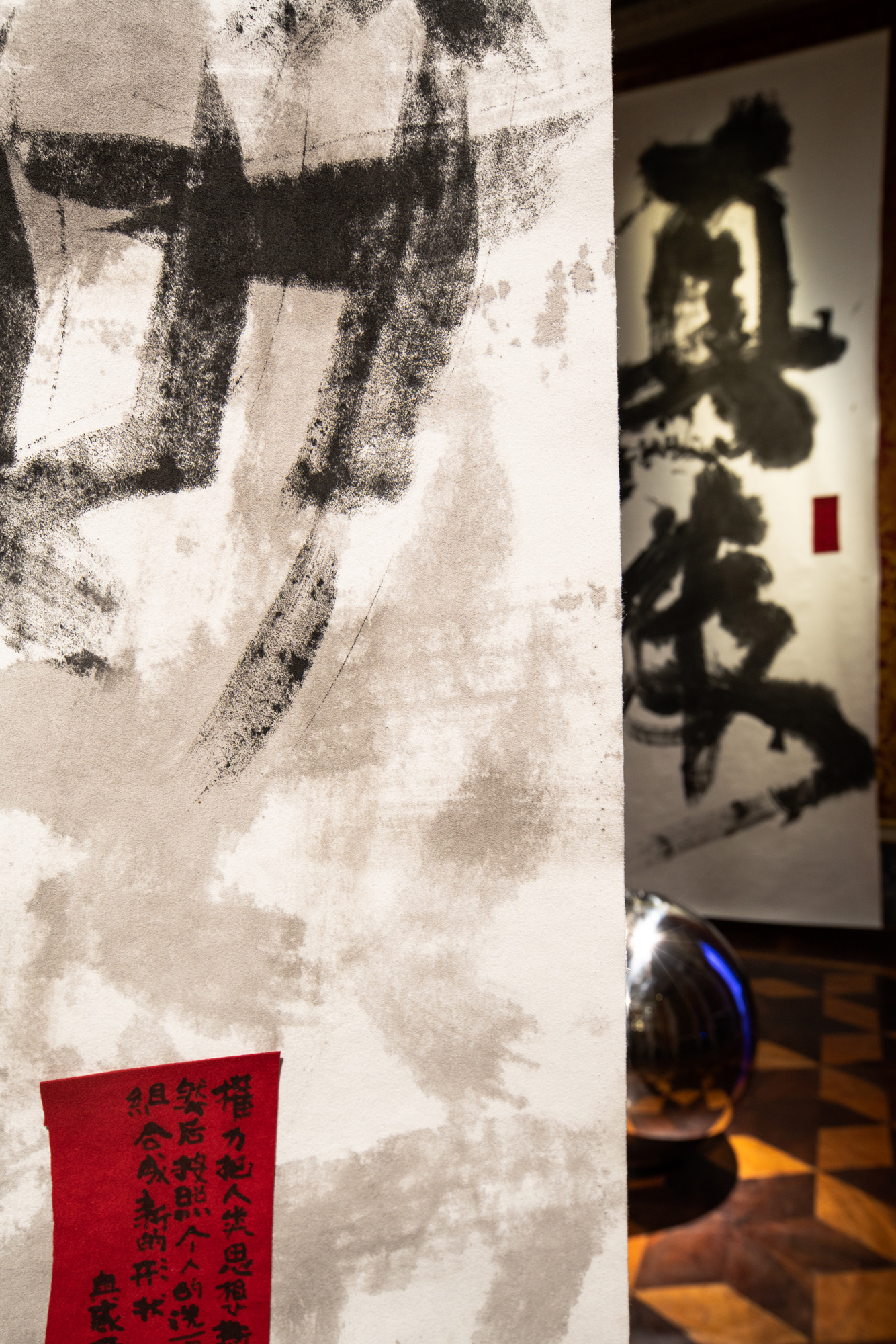 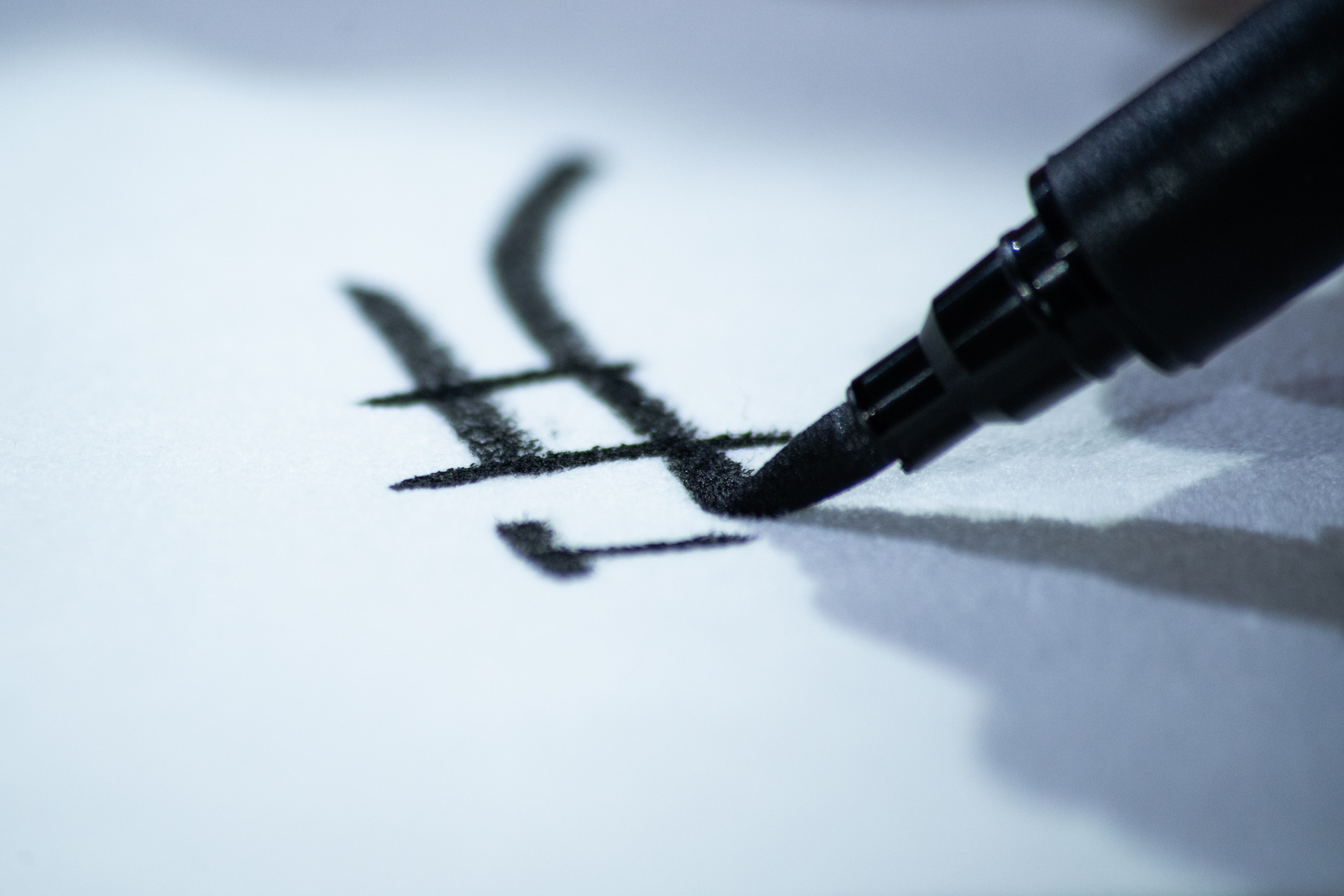 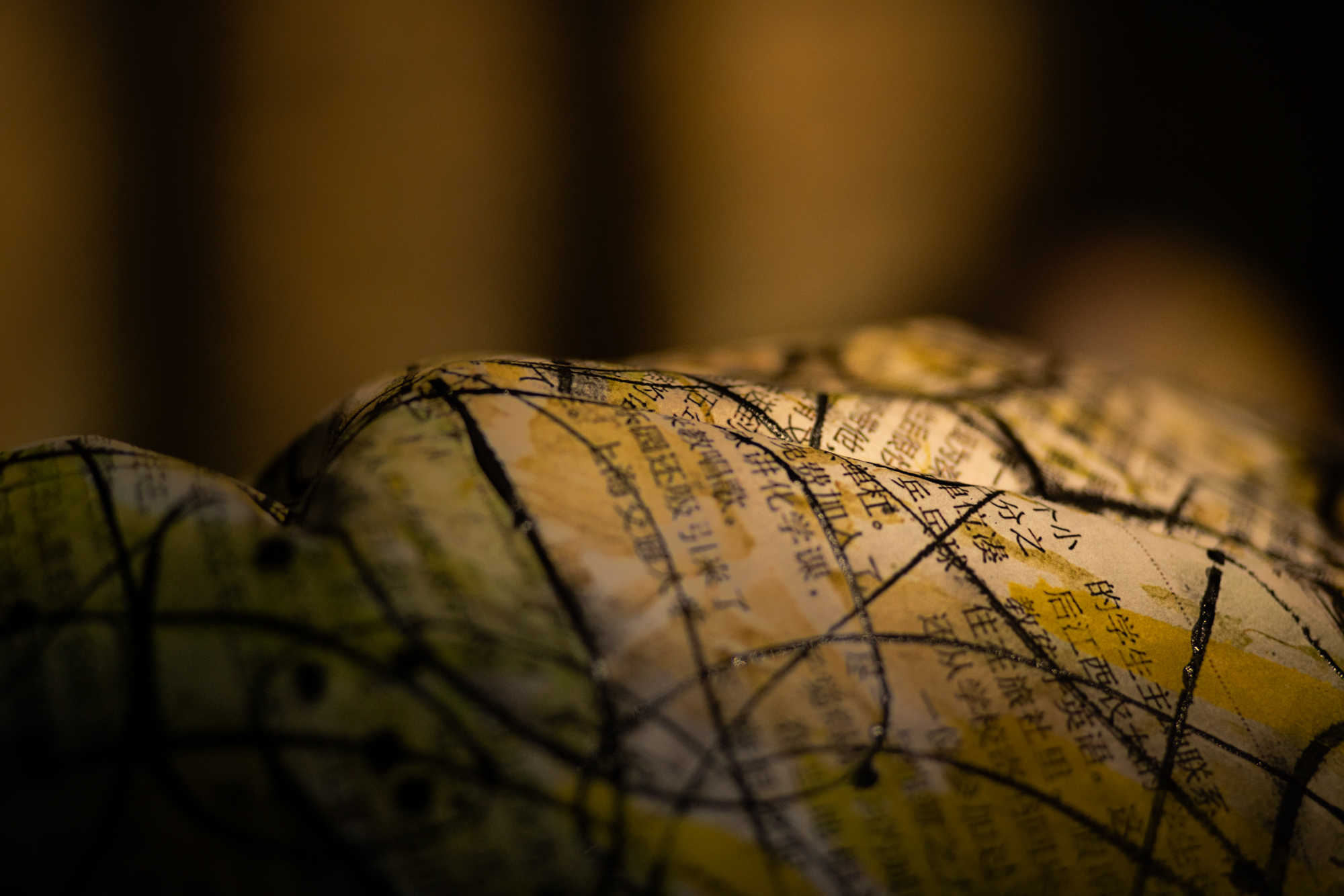 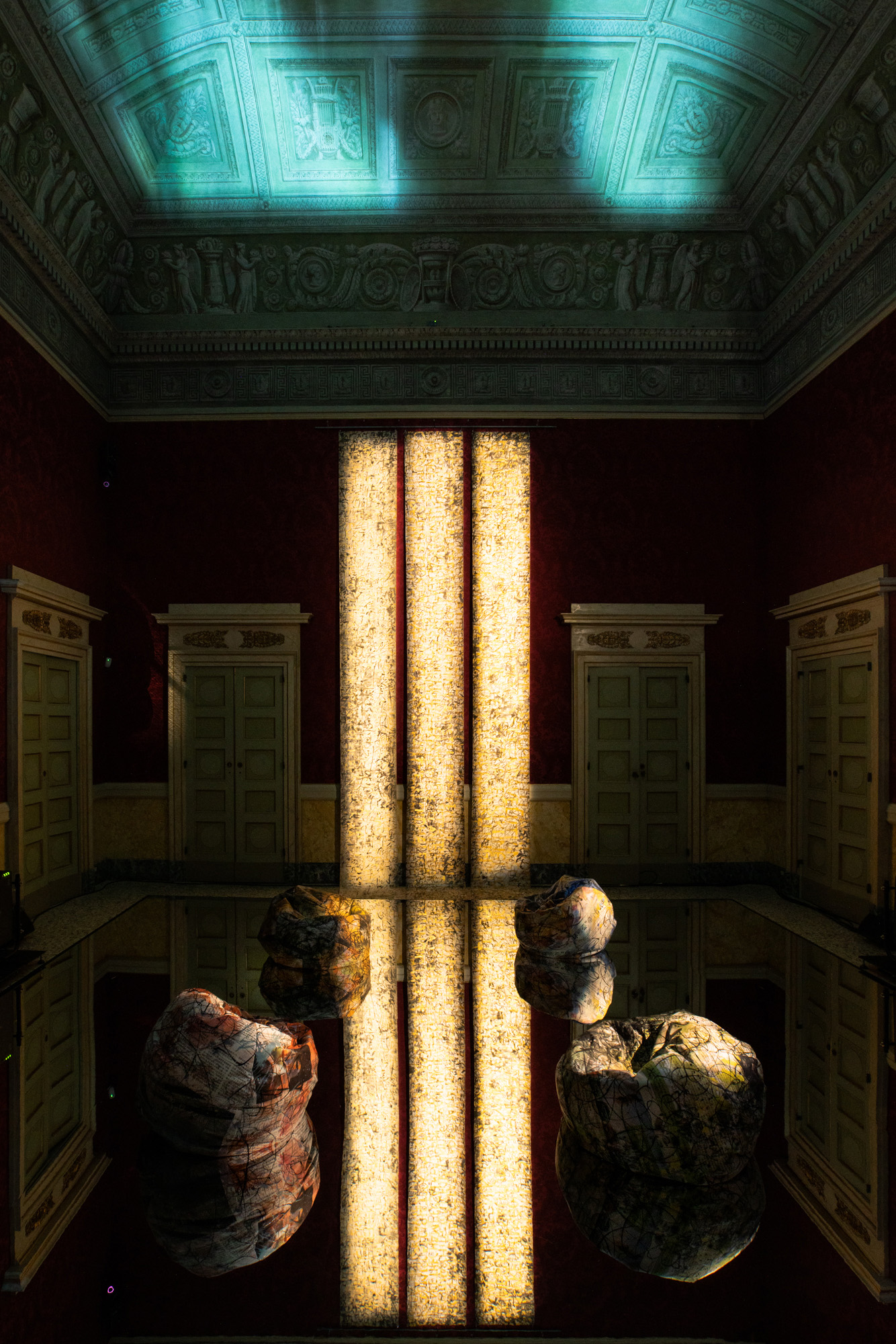 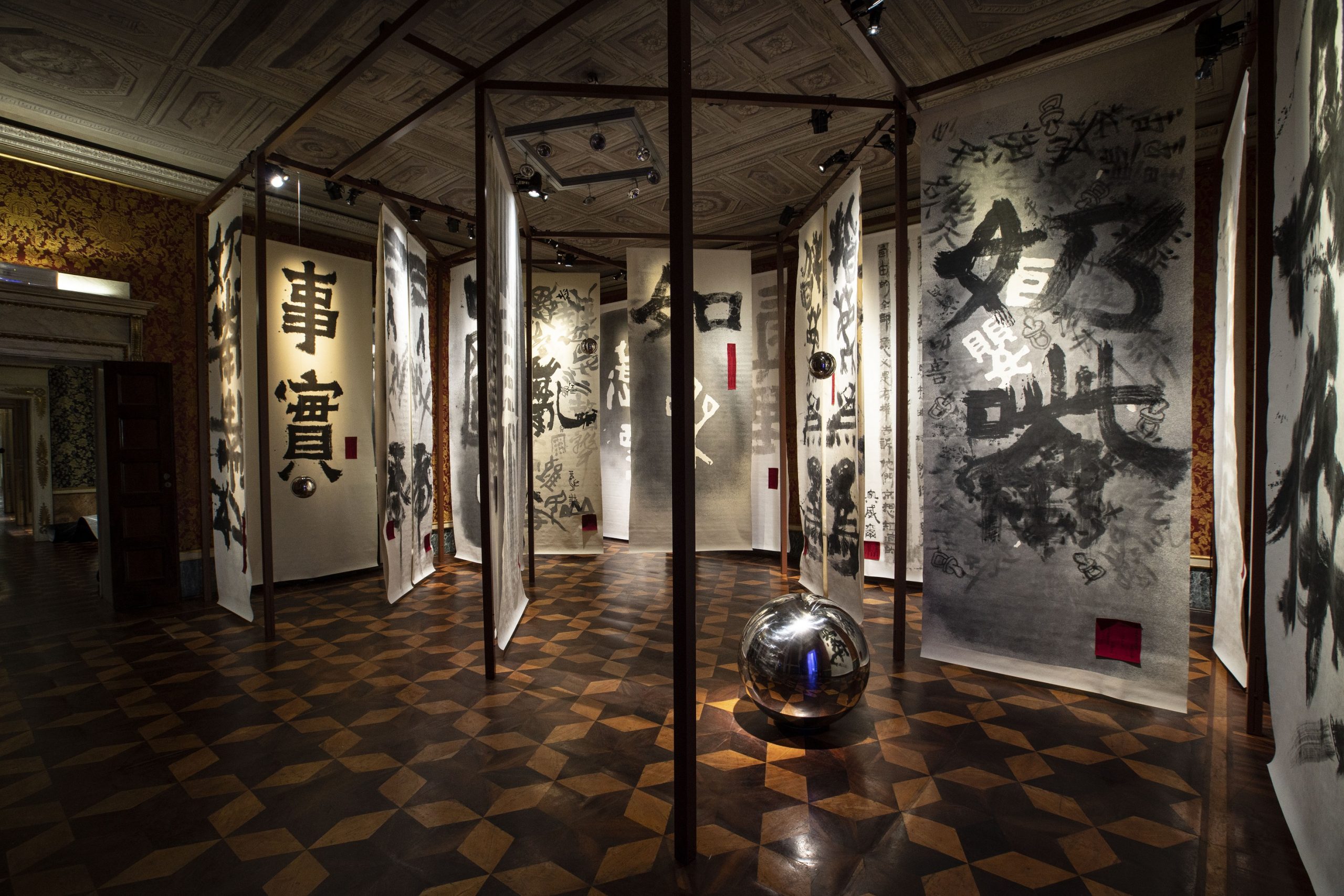 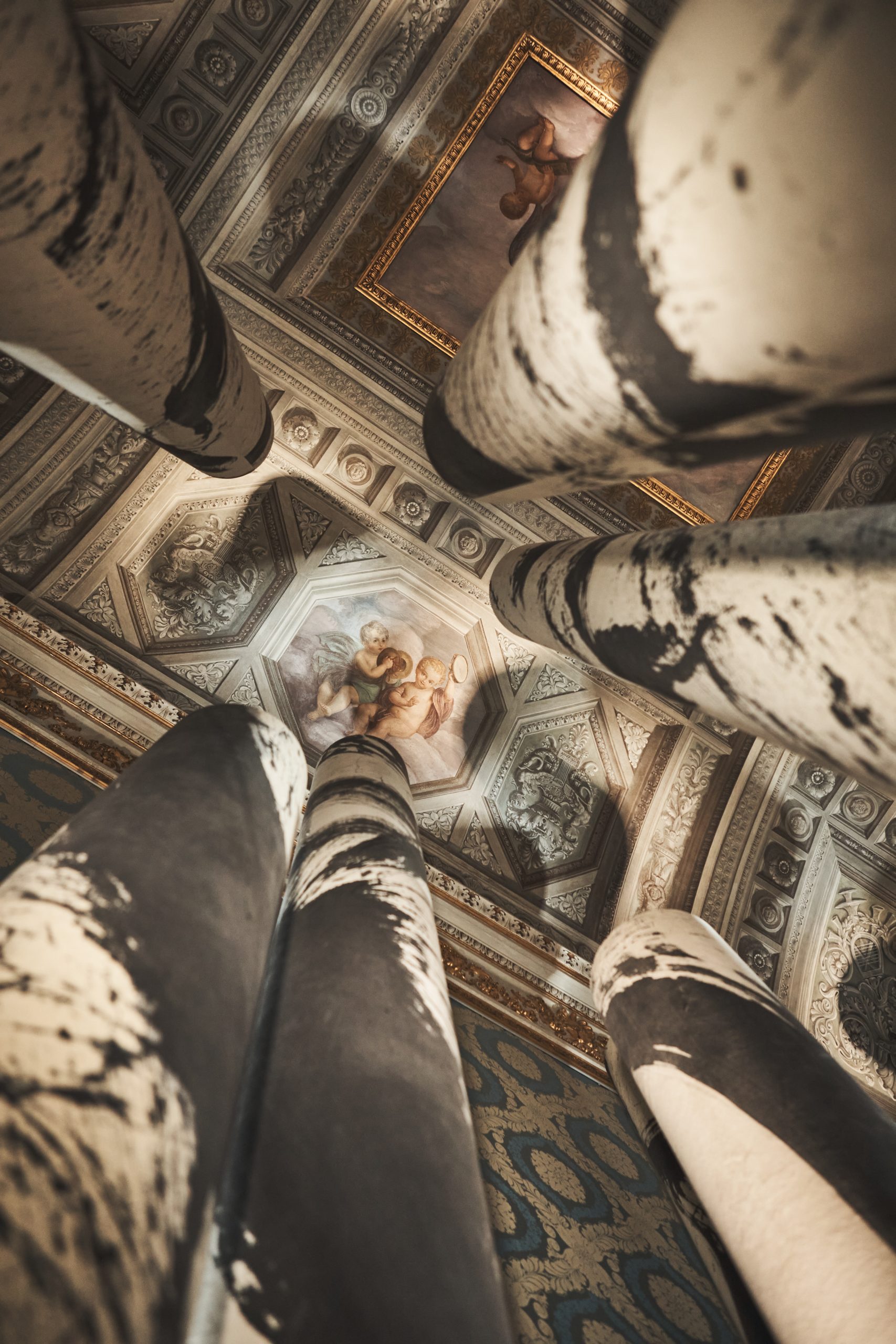